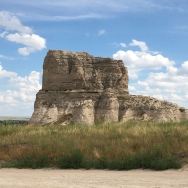 Landmarks along the Oregon Trail include Chimney Rock, Courthouse Rock and Jail Rock in western Nebraska.  The North Platte River runs near these landmarks, which is the route of the Oregon Trail.  My husband and I visited the area in July 2017.  I was born and raised in Nebraska, but had never seen this part of the state before.  I was enthralled with the beauty and history of the area.  I could visualize people like RJ and her family as they passed these landmarks almost 200 years ago.